This factsheet is designed to inform and assist individuals who wish to set up a new car or motorbike sharing or fractional ownership scheme so that it operates legally, fairly and smoothly.

The term 'car-sharing' has different connotations to different people. It can refer to the sharing of a single car by several people for a particular journey (or more accurately 'shared car travel', sometimes known as 'car-pooling'), It can also be used to describe an arrangement of shared car use or ownership where the sharers do not always travel together. Both types of schemes are useful from an environmental and community point of view as they reduce problems of traffic congestion and parking, as well as the reduction in emissions (both in use and manufacture) which results from having fewer vehicles on the road.

This factsheet describes the second variety of car sharing, where several people group together to share the ownership or use of the car, but not necessarily travelling together for the same journey. These arrangements are essentially informal car clubs.

According to Carplus.org.uk, there are currently 82,151 car club members in the UK, sharing 1,990 vehicles in over 40 locations. This is estimated to have removed over 40, 000 cars from UK roads. 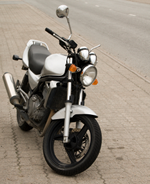 Many people may own a motorbike but simply do not have the need or time to ride it very often. To prevent the bike spending most of its time in a garage it could be a great solution to share the bike with one or more people who you know or who live close to you.

Alternatively if you and some friends have always dreamed of owning a motorbike, but perhaps cannot justify the expense, buying a shared bike together might be the best answer.

This factsheet describes a motorbike sharing arrangement which involves two or more people sharing the use of the motorbike, but not necessarily travelling together on the motorbike at the same time.

Increasing vehicle ownership has led to enormous rises in the number of vehicles registered for road use in recent years. In 2000 there were 24,406,000 cars and 954,000 motorcycles licensed for road use, and in 2008 there were 28,390,000 cars and 1,291,000 motorcycles. Including all types of vehicle there were 34.2 million vehicles licensed in 2008 (source: Department for Transport www.dft.gov.uk). These increases have led to heavy traffic congestion in our cities and pressure on the finite number of parking spaces in our streets and lanes. Also it is wasteful as many more adults own vehicles than would be necessary if people shared them between neighbours, friends or colleagues.

In recent years there has been a proliferation of car sharing schemes or car clubs which aim to alleviate some of these problems, and reduce the costs and inconvenience of car ownership.

There are several varieties of vehicle sharing schemes. At one level, there are commercial operators who run schemes similar to a leasing service with vehicles available either by the hour or by the day. At the other end of the spectrum are the many informal sharing arrangements that exist between friends, partners and siblings when one vehicle is jointly used by members of the same family or community.

Commercial car clubs now operate in many major cities and other parts of the country. Although they provide a proven systemised formula for shared use, they are often relatively expensive and there is little financial saving in comparison to traditional budget car hire firms for daily or longer usage. Some example costs are provided at the end of this factsheet.

For people with the time and interest, there can be considerable savings to setting up your own private scheme between friends, neighbours or local contacts. For those who wish to share a motorbike, setting up an informal sharing group is the only viable option because widespread commercial sharing clubs do not exist.

Sharing and the Law:

Sharing is a concept that has been widely recognised in law for centuries, both as joint ownership of moveable assets, and as a method of owning land with other people through the legal mechanisms of joint tenancy and tenancy in common. It is also possible to write contracts which allow assets to be shared with others even if ownership is not shared. For such a contract to be enforceable it is important that all parties provide ‘consideration’ (e.g. money, time or services) and that the sharing is not simply a gift by one person to others.

Although it is advisable in many situations to have a written agreement to regulate a sharing relationship, there is nothing in law to prevent an informal arrangement being agreed verbally. However, difficulties with a verbal agreement arise when one party wants to prove the contents of the agreement and the others disagree about what was said.

Car share clubs and similar unincorporated associations have no legal identity separate from the individuals involved in running the club, unlike companies. This means that club members will jointly carry the risk of liabilities incurred by any other member of the group using the shared vehicle. Using a written legal agreement will enable the sharers to allocate most of these risks between themselves.